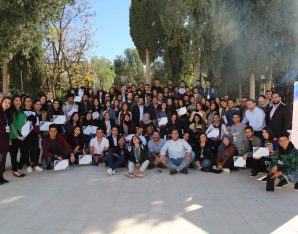 Last December, the Winter University of Afek Tounes, a partner of D66, took place. The programme which was co-sponsored by D66, taught 80+ young Tunisians about various soft skills, liberalism and the political party of Afek Tounes. The Winter University was an academy of six days, aimed to increase political engagement among Tunisians by providing workshops given by various experts and was monitored by Soraya Shawki on behalf of D66 Internationaal.

Prior to the workshop, the participants were welcomed by a delegation of Afek Tounes politicians during a ceremony. After the welcome ceremony the participants played multiple interactive games which would determine some of the main rules upheld throughout the entire academy such as being punctual and on time, respecting other opinions and active participation.

The first set of workshops were introductory and had the purpose of familiarizing the participants with the wide range of topics discussed throughout the academy. To illustrate, the workshop about communication skills, given by Meriem Fatnassi, focused on debating, presenting and how to make a convincing argument. This was followed by a workshop given by Ahmed Ben Mustapha, who touched upon the history of political systems, its definitions and party practices. Additionally, the workshop by Kabil Daoud taught participants about the founding of Afek Tounes, its structure and its liberal character.

The second set of workshops were concerned with unlocking leadership potential in the young participants and more in-depth knowledge of liberalism which was illuminated in the nature of the workshops. Sven Gerst, trainer of IFLRY, taught about the values of liberalism and its meanings. He made a comparison between liberalism and other ideologies while opening up the debate about it.

Mohamed Talel Jabnoun taught about leadership for young leaders and how you can get involved in politics yourself. In addition, a workshop by our liberal colleague Thom van Campen who made a cross-country analysis of the similarities and differences between Tunisian and Dutch politics whilst exploring how liberals have impacted the Dutch society.

Lastly, the emphasis on practical matters was not forgotten. For example, a workshop dedicated to writing a good resumé which was presented by Wided Carpentier. Furthermore, the workshop of Mohamed Ali Frioui, one of the main initiators behind the Winter Academy, focused on the importance and relevance of teamwork and how working together paves the way to success.

The Winter University was concluded with a guided tour throughout the city in which the participants visited the historical sights. One of the main highlights of the Winter University, though, were the project presentations which demonstrated what the participants had learned during the academy. Noteworthy, were the variety in experiences and projects indicating the effectiveness and fruitfulness of the academy.

All in all, the academy ended on a hopeful note since it provided the young Tunisians with tools on how to get involved in politics and how they could contribute to change in their country. A very insightful and educational Winter University that has drawn in many Tunisians to become more politically active at Afek Tounes.