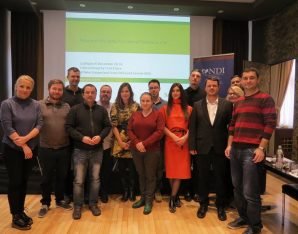 Many political parties in the Balkans suffer from a low level of integrity. Instead of serving as a stronghold for democracy, the parties create opportunities for nepotism, corruption and ethical breaches. Party leaders, activists, and the public have to respond to these problems by building mechanisms for strengthening transparency and accountability.

The event was opened by NDI, which presented the survey findings of the recent regional poll on the public perspective of polities parties. The results showed that the attitudes in terms of legitimacy of democracy are heavily impacted by the amount of corruption. Bearing in mind widespread media control and auto-censorship, fake news, and manipulations in terms of defamation of political opponents, the poll suggests political parties should focus on direct communication with citizens in the forms of smaller size household meetings or issue-based gatherings which would serve as an opportunity for sharing facts and alternative political ideas. 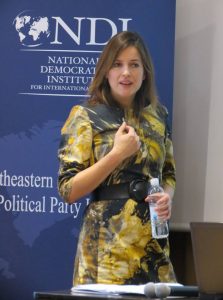 Next Willeke Slingerland, university professor and integrity advisor of Dutch D66 party, delivered an excellent presentation about the importance of political integrity as a core value for Dutch social-liberals. She noted that political parties are the weakest and the most important societal link when it comes to integrity and anti-corruption efforts. Corruption is often perceived and declared as individual responsibility, while in reality, it is the responsibility of an entire network of people who are involved in the societal phenomenon known as “network corruption”. Some individuals are part of such a network without even knowing. Abuse of state resources is among the leading examples in southeastern Europe. Parties in the Netherlands have different mechanisms when it comes to the monitoring of unethical behavior such as ethics committees or student groups which are nonpartisan. When it comes to candidate selection, D66 organizes local committees comprised of university professors, students, and party members. Together they discuss potential candidates, hold candidate interviews and talk about the implications of their candidacies. When it comes to local level politics, there is a continuous risk analysis with local counselors, in which they are constantly monitored to avoid violation of integrity.

Sebastijan Peterka from Transparency International Slovenia walked participants through the damaging effects of conflict of interest and unregulated party finance. Peterka opened the area of party finance by discussing regulations and practices both in the European Union and southeastern Europe and paid considerable attention to oversight and prevention, speaking about oversight bodies civil society role when it comes to oversight.

Professor Branko Lobnikar from Novum Institute led a session about managing up, promotion culture and transparency. A considerable part of his presentation focused on the standards of good governance, such as accountability, participation, and predictability. Participants seemed to be particularly engaged in the discussion on advantages and benefits of diversity and took active part in the group exercises. 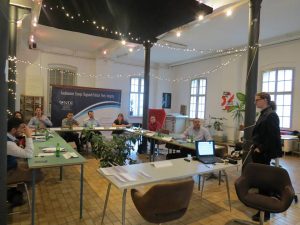 NDI’s staff held a group reflection session where participants discussed integrity deficits of their own political parties. Many participants noted that there are serious criminal and undemocratic practices in their countries, constant production of fake news and fabricated conflict.

Lastly, the Institute staff created program description and participation guidelines for the Liberal Task Force to serve as information-reminder for participating parties and program participants. The group organized a joint Facebook group which will serve as an information sharing venue and which will enable the participants to exchange best practices in the region in terms of party operations, integrity related mechanisms and ideas to improve their mutual democratic standards.