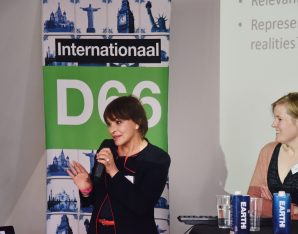 On Saturday the 13th of April the Afrikadag 2019 took place in the beautiful Royal Tropical Institute (KIT) in Amsterdam. The theme of this year was ‘’Migration: African Perspectives’’. D66 International organized a fringe meeting about climate migration in Morocco. During the meeting we went into detail about the connection between climate change and migration and what the role of the international community could be.

The meeting was moderated by Karlijn Muiderman, who is a researcher at the Wageningen University and Utrecht University. After a short introduction, Karlijn opened the floor to our honoured guest from Morocco, Dr Hakima El Haité. Hakima is the current president of Liberal International and the former minister of Environment for Morocco. Hakima explained that migration always involves multiple factors. It is therefore difficult to pin down one cause like climate change. However, while experts continue to debate on the exact details between this relationship, the effects of climate change are increasingly becoming worse. To overcome these problems, we should stop wasting money on the defence of our borders. The internationalcommunity should instead focus on investment in sustainable development within the region. 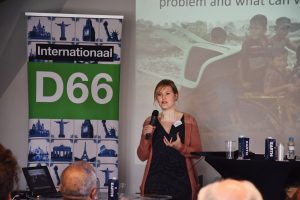 The second speaker of the meeting was Ingrid Boas. She is an assistant professor at the Wageningen University and has numerous publications on the topics of environmental governance and migration. Initially, Ingrid her research focused on climate migration and the role of the international community. This recently changed, however. Climate change does not cause people to migrate to Europe, instead, they migrate within the region. The effects of climate migration are, therefore, mainly experienced on the local level. Rather than an all-encompassing solution, the focus should be on small-scale solutions.

After a Q&A with both the speakers, it was the turn to Marthe Hesselmans from the D66 thinktank Mr Hans van Mierlo Foundation. Her book, which will soon be published in English, offers a progressive liberal vision on migration. In her pitch, she argued that we should stop perceiving migration as a problem. Instead, migration offers a huge opportunity. An exchange programme like Erasmus offers the perfect chance for both European as Africans to profit. Imagine what young Africans can learn from Europeans, but also what young Europeans can learn in Africa. 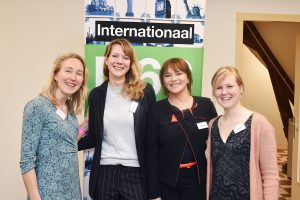 On behalf of D66 International, I would like to thank everyone who visited our meeting. Also thanks to all the speakers and the people from Liberal International who helped us organize this meeting. A special thanks to the Foundation Max van der Poel, who organized the Afrikadag. Hopefully, until next time!