On the 9th of February in Skopje, North Macedonia, a regional conference on “One Balkan Toward the EU” took place. The event was the closing conference hosted by the ProgWeb academy, whose goal it is to strengthen the social democratic and liberal family in the Western Balkans and closely follows the expansion policy of the European Commission. The conference, on the European accession policy toward countries in the Western Balkans and the subsequent advantages this will have on the EU, discussed the setback that occurred last year. Despite the EU’s collective ongoing commitments to the eventual integration of states in the Western Balkans, the decision to open accession negotiations with North Macedonia and Albania was denied by France, The Netherlands and Denmark late last year. The failure to reach unanimous agreement defied the recommendation put forth by both the European Commission and Parliament at the time. Thus, the conference composes a piece in a larger revised strategy put forth by the European Commissioner for Neighborhood and Enlargement to involve Member States more directly in the accession procedure prior to the initiation of negotiations, as well as reforming the thematic clusters that need to be upheld for accession. 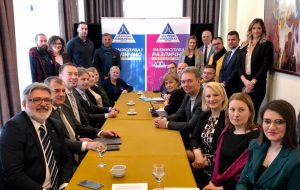 Annelou van Egmond, the Vice-President of the ALDE party and member of D66, was present at the conference. She was there to advocate for the European liberal position on the integration of states in the Western Balkans, as well as to restore trust in the candidates on European reforms and future accession prospects. In her speech, she especially emphasized that the European liberals stand behind the new accession procedures. She concluded her speech with why she believes a strong cooperation between the liberal parties of the European Parliament and the states in the Western Balkans, as well the Europe as a whole, is essential for the future of a peaceful and prosperous European Union.

Below you can read her speech:

“Thank you for including me in this important meeting of the Young
progressive voices in this region. It’s the definitive proof that
debating the pro’s and cons of accession to the EU is an old school
debate. No one needs convincing in this arena. But let’s discuss it
anyway.

As Vice-President of ALDE I can tell you we tirelessly promote the case
of countries that are willing to make the adjustments needed to secure
the rule of law, respect the rights of individuals to make their own
choices in life and love, fight corruption and promote the free market.
Because that is what Joining the EU means. Mind you: it’s not an ATM
with ‘free money’. It’s a community of values first. And these are
liberal democratic values too! It’s obvious that in other countries
that joined recently it was the liberals in these countries that pushed
the accession agenda. They know how to do this!

Now, regarding the newly proposed outline of the accession proces:
These are not new criteria. These are new rules for the process. The
liberals in the European Parliament support this new proces for two
reasons.

* Yes, it makes the process more transparant and hopefully ups the
speed so countries that meet the criteria don’t have to wait
endlessly.
* But also: it should discipline the member states. Just because
you’re ‘in’ it does not mean that you can stop meeting the
criteria or can oppose the accession of others on a whim.

This is important because there are benefits to the EU of Western Balkan
integration and eventually Western Balkan presence in the EU. Maybe the
most obvious benefit is the economic one because improving economic
cooperation will allow for more wealth on either side. But I want to
focus on the benefit of ensuring peace and security in the region.

There are three important reasons:

* Unstable Balkans are a threat to both Europe in general and the EU
in particular;
* You are, just because of your location, a link in a key migratie
route for people who are rightfully or just hopefully trying to find a
way into the EU. The need to coordinate and cooperate is evident;
* We need a stronger EU presence in this region to stop Russia’s
aggressive interference.

For this it is not enough to just speed up the process of accession but
also, and even more pressing, to have a strong and stable liberal
representation in national politics. It has been proven again and again
in many surrounding countries that the conservative and
christian-democratic national parties do not block the Russians
interfering when they think this is needed to secure their own seats.
They think it keeps them in power, when in fact it reduces them to
Putins’ puppets.

It is up to you to not let them get away with that.”