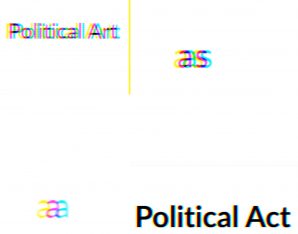 As we have recently all been faced with the limits of confinement, whether it be in a physical space or within our own thoughts, what better way have we found to escape than through art? Whether it be literature, film, music, or visual; for many this crisis has reaffirmed the power of art to liberate and express.

In different times, the Eurovision Song Contest would currently be taking place in Rotterdam. Eurovision – a global platform for diversity, inclusion, representation, and expression – inspired D66 International with the idea to host a symposium on ‘political art as a political act,’ and to invite artistic activists to discuss the intersection of politics, art, activism, and self-expression.

Though it’s not possible to physically hold this conference, we remain committed to highlighting the valuable work done by LGBTI+, feminist, and all other human rights activists in furthering social and political inclusion. By conducting Zoom interviews with ‘artivists’ from across the Europe and MENA regions, we proudly present a mosaic of thoughts, feelings, passions, and political discussion on artistic works, sending a message on how art can serve as a political tool, amplify voices, and create a space for self-expression.

Evar Hussayni is an artist undergoing an experimental phase in her practise which is focused on visibility, political/historical positioning, colonial violence and its relationship with the trajectory of Kurdish feminism/womanhood, spanning several interdisciplinary mediums: archives, filmmaking, photography, painting and creative production.  Through her research into archives, Evar also founded The West Asian and North African Woman’s Art Library. Evar’s research into archives continuously questions why hierarchies and mechanisms of exclusion play such a prominent role when exploring heritage and modes of documentation, whose history is being preserved/recorded and whose history is being erased/dismissed/altered? The aim will be to correct, enrich and expand the storyline concerning Kurdish women.

Narîn Briar is an academic, and human rights advocate who integrates methods like portrait photography, film, and conflict analysis as a means to share the experiences of silenced ethnic and religious minorities. She also works to help empower climate change activists around the world. Through her website, AidNarin.org she shares her platform in helping support various targeted groups by posting different projects that anyone could help contribute to. In 2019, she was recognized by Elizabeth Warren, and her work was displayed at institutions such as Harvard, Yale, and Boston College.

Ahmed Hassan is a highly experienced cinematographer and film editor with nine years of experience. He has worked on documentaries, short films, advertisements and television shows. The most notable documentary was ‘The Square’ (2014), in which he starred as one of the main characters, depicting the ongoing Egyptian Revolution of 2011 from its roots in Tahrir Square. The film was nominated for an Academy Award for Best Documentary Feature at the 86th Academy Awards. It also won three Emmy Awards, one of which he won for Best Cinematography for Non-fiction Programming.

Zuzanna Hertzberg – daughter of Anna, granddaughter of Krystyna and Janina – is an interdisciplinary artist, artivist, and researcher. Her art includes painting, performance, textiles, and assemblage. She is the author of installations and collages using archival materials. She is interested in the interweaving of individual and collective memory, and in the search for identity in the mechanism of appropriation and restitution of minority heritage, especially women’s heritage, as well as issues of geopolitics and strategies of marginalisation of uncomfortable narratives. She is the co-founder of the Jewish Antifascist Block, a member of the Antifascist Coalition, and a member of the board of the Association of the Jewish Historical Institute of Poland.

Yannic founded the platform Famous For My Dinner Parties together with Junshen Wu and Sandra Mayer with the goal of looking at food culture beyond terms of ‘good’ vs ‘bad’. Instead, they try use food, something so everyday and ubiquitous, as a lens through which the underlying structures and issues in our societies are reflected.

Since July 5 2018, Said Kasmi is a city councilor in Rotterdam on behalf of D66. He is responsible for the portfolios of Education, Culture, and Tourism. Kasmi’s political career for D66 started in 2009, as the front running candidate in the sub-municipality of Rotterdam Centre. The last couple of years Kasmi was, amongst other things, the director of the National Bureau of D66, as well as Commissioner at Woonbron, and member of the Supervisory Board of Panmeijer. Until 2010 he worked at the Radar foundation, where he provided trainings for educational institutions and civil society organizations.