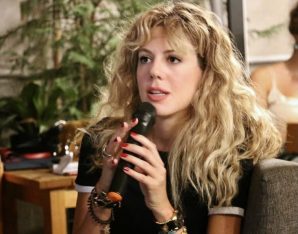 Hi Tracy! You are the founder of Coffee and Politics in Lebanon. Can you tell us a little bit about yourself?

I come from an engineering background, followed by public policy and international affairs. I have never been involved in politics in Lebanon because I always felt I did not belong to any group or political party. But I have seen what can b e done in other countries, and I couldn’t understand why we couldn’t do the same in Lebanon. I believe in community work and the power of a small group of people working together towards a common cause. I believe in individuals, in building connections with people from different backgrounds and opinions, and in small-scale change. I started Coffee & Politics with a very simple aspiration: I wanted to learn more about politics and take back my Lebanese and Arab culture. I wanted to learn about our civil war, the way our government functions, our legal frameworks, the political parties in power and our history.

What does Coffee and Politics entail? And who is it for?

Coffee & Politics is an independent political discussion platform aiming at re-opening the political dialogue between Lebanese citizens, regardless of their political affiliation, professional background or personal beliefs. It aims at giving Lebanese youth the desire and the means to engage in politics, encourage critical thinking and help citizens shape their own political opinions, help citizens develop the necessary knowledge and skills for them to make informed decisions regarding the governance of their country and encourage the emergence of new talents in politics.

Your aim is ‘to bring back politics to the people.’ Can you explain why you believe this is needed in Lebanon? How do you look at the political landscape in Lebanon?

After the 1975-1990 war, there was no transitional justice, no official winners nor losers, and no work done on the memory of the war. The same warlords remained in power, bound together by strong power-sharing agreements, which strengthened corruption and lack of accountability. This led to a general apathy from the majority of the population. Things were simply supposed to be like this, and if anyone tried to revolt, they were reminded of the “war threat”. It is only after realizing how incompetent and self-serving the ruling elite was that people started to fight back. Once they all gathered together in the streets, they realized that the war threats given by politicians were empty and not founded on any reality on the ground. Discussion allows people to discover each other. It allows someone to listen without feeling attacked, and teaches people to reply without aggressing the other person. The idea of discussing political concepts and how we want Lebanon to be instead of focusing on criticizing politicians allowed a shift in people’s minds, and made the discussion easier. If things can be different, then maybe the first step was to learn how.

Coffee & Politics’ mission is to bring back politics to the people. It is a personal mission and a collective one. The Lebanese people were robbed of their history and were unable to participate actively in the fate of their country. The first step to change that is by bringing back political discussion to the streets, to coffee shops and public spaces. Discussing our history, the economy, and the way the country is being ruled outside of any political structure or institution and without any agenda was a real game changer for people. It allowed them to meet like-minded people and to interact directly with experts, professors and politicians.

What are you most proud of regarding Coffee and Politics?

What I am most proud of is the community I was able to build around my mission.

Ever since starting Coffee & Politics in September 2017, I have met the most incredible people. Meeting like-minded individuals who work for change in a country as difficult as Lebanon makes me believe that hope resides within us, no matter the situation we are in. So far, we have organized over 60 talks in 16 different coffee shops and public spaces in different regions and also online. We have partnered up with 17 local and international institutions. We have gathered a community of 150 volunteers, and between 30 to 120 people attend each of our talks.

Where do you see yourself and/or Coffee and Politics in five years?

In five years, I see Coffee & Politics branching out even more in regions. In order to reach a new audience, we have to go places we’ve never been, especially in villages where the traditional political parties have the monopole over the political discourse. I also want to target more specifically high school students and university students, especially in terms of civic education and recent history, which is not taught in schools.

In October 2019, young people started a revolution in Lebanon. What caused this? And what have been the effects?

The general discomfort has been building up for a while. The October 17 revolution did not happen suddenly. The country was already deep into the economic crisis, and politically people felt completely alienated from their representatives in power. Unfortunately, due to a lack of political organization from the opposition and no international will to change the status quo in Lebanon, along with the COVID pandemic that forced people out of the streets, the initial revolt died out. But I still believe there were positive outcomes from the initial October 17 movement, including a sense of unity between all sects and different political affiliations, and the emergence of alternative political parties that are more in touch with people’s demands and have not participated in the post-war power sharing. This new web of political organizations will strengthen throughout the years and will reach a larger audience.

Lebanon is going through tough times since the Beirut blast last year, but also an unprecedented economic crisis and, of course, the coronavirus. Many young people are leaving the country. You decided to fight for change. How do you remain optimistic?

To be honest, I am not optimistic. As Camus states: “Greatness has changed sides. It is in protest and sacrifice without a future.” The way I see things is there’s a battle we have to fight, regardless of whether it can be won or not. So I try to enjoy the process. One has to find joy in the fight. I also see the revolution as a duty. Before pretending to want to have a revolution, we have to revolt on ourselves first. We have to unlearn all the things we were led to believe, and all the ways we were told to live our lives. Only when we work through a deep change within us can we help implement change outside of us.

What do you think is necessary for a sustainable (political) future for Lebanon?

The only necessary ingredient for a sustainable political future in Lebanon is its people. The citizen is at the core of a democracy, and sometimes we tend to forget that and give up on trying to change things, but it’s important we keep ourselves at the center, no matter the method. It can be through political discussions, joining a political party we believe in, helping out locally in our neighborhood or community, or just informing ourselves and giving people around us tools to form their own opinions. It’s active citizenship. As Camus says: “The people must regain their courage to regain their sovereignty. Without courage, the people remain without a place.”

This blog was written by Daphnie Ploegstra and Paulien Koopman, members of team MENA of Jonge Democraten.