Job vacancy! Bundeskanzler(in): what will the post-Merkel era mean for Europe? 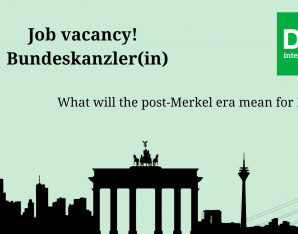 copyright: Tiemen van Dijk
Date: 10th of June 2021, 12.00 – 13.00
Online
Zoomlink: https://zoom.us/j/98188793533
In June, the citizens of Saksen-Anhalt will cast their vote for their state elections, which will be the prelude for the national German elections on the 26th of September. The iconic Angela Merkel will finally pass on the Bundeskanzleramt, leaving some enormous shoes to fill. Who is going to fill this void? Will the German elections be more dramatic now? And what will be the impact on Europe?
By now, the Grünen, CDU/CSU, the FPD and SPD have announced their kanzlerkandidat. The German election campaign has officially begun and the polls predict it will be an election like no other.
On the 10th of June, we will delve deeper into these elections with the following experts and politicians:
Jeroen Dobber (Moderator)
Jeroen works for the Friedrich Naumann Foundation in Brussels as European Affairs Manager & Head of the FNF Security Hub.
Prof. Dr. Christina Morina
Christina Morina is Professor of General History with a particular focus on Contemporary History at the University of Bielefeld and was a visiting assistant professor at the Duitsland Institute Amsterdam.
Nicola Beer
Nicola Beer is a Member of the European Parliament for and Vice-President of the German Freie Demokratische Partei, the German sister party of D66.
Hanco Jürgens
Hanco Jurgens is senior researcher at the Duitsland Institute in Amsterdam and is the coordinator of the Master German Studies at the University of Amsterdam.
We will start at 12:00 with laying out the historical and contemporary context for approx. 20 minutes featuring Prof. Dr. Morina, before proceeding to discussion of the following three questions:
– What void will Angela Merkel leave and what consequences will this have for German political dynamics?
– How will a new German chancellor impact European politics?
– What kind of partner will Germany be for the Netherlands in Europe?
At the end of the discussion, there will naturally be room foor questions from the audience.
You can join this event through Zoom or watch it live on YouTube.
The entire event will be in English.
You can join this event through Zoom or watch it live on Youtube.
The event will be in English.

Job vacancy! Bundeskanzler(in): what will the post-Merkel era mean for Europe?